“Is one man tough enough to take on the most formidable forces and still not lose heart?”

Is one man tough enough to take on the most formidable forces-and still not lose heart? This gritty and gripping novel of a small-town murder tells the tale of one man’s final chance at personal redemption-in a deadly swirl of political corruption, reignited passion, and are renewed purpose in what it takes to be an honest cop. Drawing from the author’s own experiences in his hometown of Youngstown, Ohio, this searing story unravels the fabric of the town through one profoundly lonely, fiercely loyal man. Chief of Police Thomas P. McCarrie, known as Tommy the Quarterback, is a brutally honest, hard-drinking divorcee who is bent on running a scrupulously fair department, despite pressure from corrupt power-mongers like newly elected mayor, Carly Giustino. When the son of a police lieutenant and his girlfriend are murdered, Tommy unearths links to a mafia operative named Mose Pagliaro. It is then up to Tommy to thwart the town’s rotten elements. Both tough and tender, this fast-paced, page-turning novel paints an authentic portrait of a rusty American industrial town, and the people who are duty-bound to protect it. It is a must for anyone who relishes a well-told read, loaded with action, compassion, and surprises. 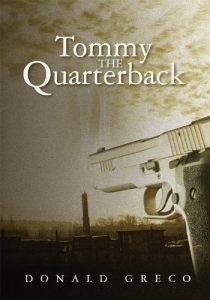 “Tommy the Quarterback, is not just a great book that deals with a Chief of Police that is intent on maintaining order. It is about a man that is balancing family, his personal life, and the pressures of a job as an officer of the law all while trying to stay one of the good guys.”